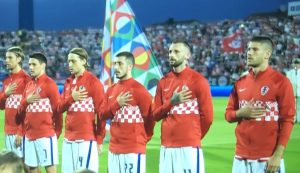 After a 3-0 loss in their UEFA Nations League opener, Croatia faces world champions France in their second match tonight at Poljud stadium in Split.

Coach Zlatko Dalić told a press conference his side is ready to bounce back after Friday night’s disappointing match against Austria in Osijek.

“We didn’t expect that, I really don’t know what to say. The situation is not easy because it is the end of the season and the players have their problems, some are thinking about transfers, some are injured. However, we will do our best”, said Dalić, adding that a number of favourites also stumbled in the first round.

“In the first round of the Nations League, the four best national teams from the last World Cup were defeated. We are all in some trouble. France will be powerful and strong, they have a large selection of players on the roster. Varane is out, and a defender from Liverpool comes in who is even better. No Mbappé, they replace him with an even faster player.”

Dalić says that the Nations League does not suit Croatia, but every game is important and they don’t want to give up.

“We are not looking for an alibi, it is the same for everyone and we must find the strength and energy. I thought we would get some more energy and time to sort it out, but we lost it.”

Dalić also revealed how Croatia will start against France tonight.

“Livaković will be in goal, that was the agreement that he would be in goal for the second and third match and Ivušić for the fourth match. At right back we have no other option that Juranović. Šime (Vrsaljko) is on his way back, maybe he will be fit for Denmark of France (away).

We will see if we play Sosa or Barišić at left back, it depends on if we play defensive or attacking. Erlić, who plays in Italy, will come in at centre back and get his chance. Vida, is also ready as well as Šutalo.

In midfield we have Brozović, Kovačić and Modrić, and in attack we don’t have too many options – Brekalo, Majer, Kramarić or Budimir,” Dalić said, adding that he will definitely make changes during the match bringing fresh legs on.

“We have to be better on defence, not open up too much because France use that very well.”