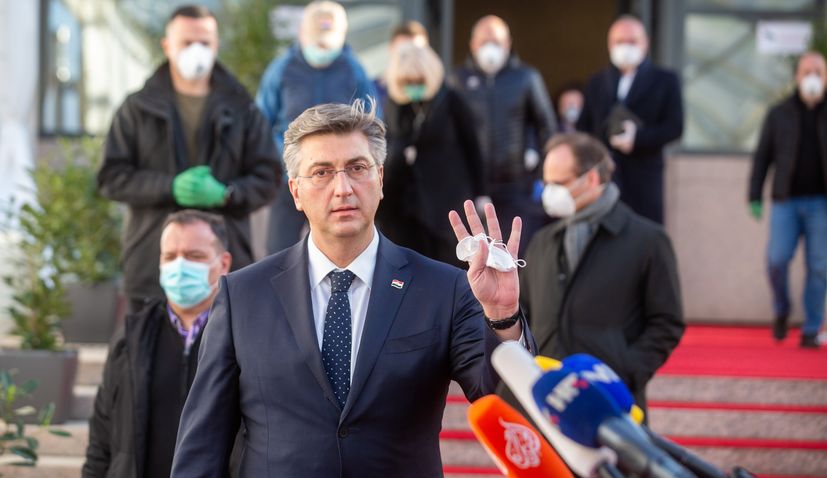 ZAGREB, Dec 21 (Hina) – Prime Minister Andrej Plenkovic said on Monday the government would adopt a national COVID-19 vaccination plan on Wednesday, adding that he was confident a large majority of people would get vaccinated and achieve “an immunological shield against this vicious disease.”

Speaking to the press ahead of a meeting of the presidency of his Croatian Democratic Union (HDZ) party, Plenkovic said the national vaccination plan was drawn up by the Health Ministry based on input from the Croatian Institute of Public Health.

He said a public awareness campaign would be launched so that as many people as possible could get vaccinated over the next six months.

Plenkovic said he would get vaccinated even though he had recovered from COVID-19, adding that he was in favour of vaccination.

As for announcements that many people would not get vaccinated, he said he was confident that a large majority, notably after the campaign, would trust doctors, scientists and experts. He added that vaccination would not be mandatory.

Plenkovic said vaccines were one of the greatest achievements in medicine and that without them life would be different today as many diseases were no longer a threat.

Commenting on the decrease in the number of new coronavirus cases and what he expected of the latest restrictions, he said that evidently the decrease was also the result of the measures that had been taken.

That is very good and encouraging, but it is up to all of us for the trend to continue, he added.

University and school students will be on holiday for almost a month, talks have been held with employers about collective vacations, and state and public administration staff are working from home, whereby we are trying to reduce physical contact as much as possible, Plenkovic said.

The time from tomorrow until January 8 or 10 is very important for reducing infection as much as possible through disciplined behaviour by most of the population, he added.

Asked if some of the restrictions should have been imposed earlier to save as many lives as possible, Plenkovic said Croatia had measures in place all the time and that they were adequate and proportionate to the spread of the epidemic.

They have been taken based on expert recommendations and have been balanced with healthcare, the economy and finance. There will be no curfew or lockdown in Croatia and I think that with the measures taken we have prevented the spread of infection through informal contact, he said.

We are sorry for every life lost and like many countries we have experienced a strong blow in the second wave, we are fighting against it and are glad that the situation looks better, Plenkovic added.

Purchase of fighter jets will not be delayed

Commenting on the position of the largest opposition Social Democratic Party (SDP) that the purchase of fighter jets should be postponed, Plenkovic said there would be no delays and that the interdepartmental commission had made a thorough analysis of the bids received. He said that the government would study all the aspects and discuss the matter in greater detail after several weeks of consultations and checks.

Asked if the Defence and National Security Council would be informed, Plenkovic answered in the affirmative, saying that the President of the Republic had already been acquainted with the analysis.

Summing up the past year, Plenkovic said it was very demanding and difficult because the global pandemic has radically changed our way of life, affecting the health of the nation, the economy and finance. “But overall, we think we have reached the best solutions in the present circumstances,” he said.

The government has been monitoring the situation in China since January, responding promptly. Our tourist industry performed better than many other Mediterranean countries, we held a parliamentary election at the epidemiologically and politically most opportune moment, ensured stability, protected jobs, intervened in the private sector with HRK 7.7 billion, maintained the credit rating at investment grade, entered the European Exchange Rate Mechanism II, and secured more than €24 billion in the new Next Generation EU facility for the next ten years. It was politically tough and economically and financially challenging, but we did what we thought best for Croatia, the prime minister said.

Speaking of local elections due in May next year, Plenkovic said that local organisations of the HDZ would nominate their candidates by the end of January. He said he expected good results both at county level and in cities, notably Split, Osijek and Zagreb.

Plenkovic said that this year’s last meeting of the HDZ presidency, national council and parliamentary group would recap the political situation and adopt important documents for the 2021 work programme and financial reports for this year.