Around 1,000 Croatian fans were at Stade de France to witness the nation’s first win over France in eleven meetings.

A penalty from captain Luka Modrić was enough to give Croatia a 1-0 win over the world champions in the UEFA Nations League tonight. It was the first time Croatia had beaten France after six loses and four draws.

Croatia made a dream start when in just the 5th minute they were awarded a penalty after striker Ante Budimir was brought down win the box.

Modrić stepped up and although French keeper Mike Maignan got a hand to it, he could not stop it going into the back of the net and Croatia would lead 1-0.

The goal was Modrić’s 22nd in a Croatia shirt in his 152nd appearance.

Kylian Mbappe had a shot saved in the 20th minute, but he and Real Madrid star Karim Benzema were kept under control by the excellent centre back pairing of Josip Šutalo and Martin Erlić. 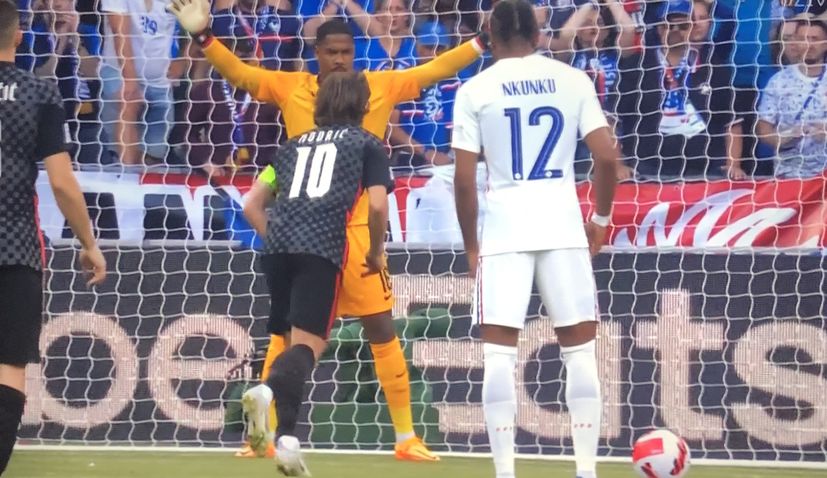 Modrć made no mistake from the spot (Screenshot)

Whilst the home side created some pressure in the first half, Croatia also enjoyed possession and looked dangerous a couple of times down the right when Brekalo managed to get past his defender.

The French started the second half strong as they sought out an equaliser as Mbappe and Benzema both created chances but Croatia would scramble in defence to keep them out.

Croatia had a big chance to go further ahead in the 57th minute when Josip Juranović intercepted a header aimed for the French keeper but instead of getting a shot off, he tried to find Pašalić who was unable to beat the French defence to the ball.

Mbappe went close in the 60th minute but Ivica Ivušić would deny him with his legs. Substitute Lovro Majer went close in the 71st minute, but his shot from inside the box was well saved by Maignan. France had all thee possession in the final ten minutes but could not manage to find a way through and Croatia would hang on for the win.

Croatia is now in second place in Group 1 with 7 points, two behind Denmark with two matches remaining in September.