VELA LUKA, 23 July 2019 – A series of concerts are being held in the hometown of legendary Croatian singer and songwriter Oliver Dragojevic, who passed away on last year aged 70.

For the next week, Oliver’s birth place, Vela Luka on the island of Korcula, will host a series of concerts in honour of the great singer, culminating into a big concert on 29 July, the day Oliver passed away in 2018.

Tickets for the concert ‘Trag u beskraju’, which will take place on 29 July on the square in front of Sv. Josip church at 21:30, sold out in just hours so the Vela Luka council has decided to put up a big screen which will show the concert live in the town.

Some of Oliver’s greatest hits, such as “Galeb i Ja”, “Cesarica”, “Oprosti Mi, Pape”, “Skalinada”, “Zuto Lisce Ljubavi”, and “Nadalina” will be performed by the artists on the night. 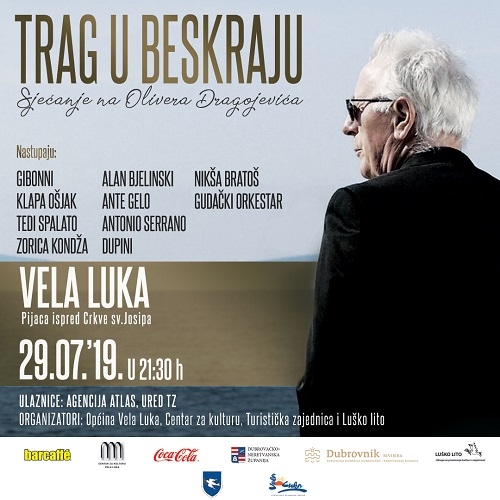 Oliver was born on December 7, 1947, the fifth child of Mate and Kate Dragojevic in what is now the school building ‘Natko Nodilo’ in Vela Luka on Korcula, but was a place where women gave birth then. His mother named him after Oliver Twist, the singer. He moved to Split after his father got a job there and spent most of his life there.

Dragojevic was one of the few Croatian musicians who has performed at Carnegie Hall (New York), Royal Albert Hall (London), Olympia (Paris) and the Sydney Opera House.

The Croatian government declared for the first time in the nation’s history that the day of Oliver’s funeral last year would be a National Day of Condolence and flags all around the country flew at half-mast.