ZAGREB, Sept 5 (Hina) – According to estimates, between two and three thousand people have rallied in Zagreb’s main square on Saturday afternoon for the Freedom Festival protest in response to coronavirus prevention measures.

They carried banners which read “Take off the mask, turn off the TV, live life to the fullest”, “Covid is a lie, we’re not all covidiots”, “Parents and children are inseparable”, “Better the grave than to be a slave”, “Free life is our power”, “Normally, period” and “We believe in the strength we have”.

The festival was organised by the Rights and Freedoms initiative. Participants arrived by bus from Dubrovnik, Split, Sibenik, Zadar, Rijeka, and Istria. 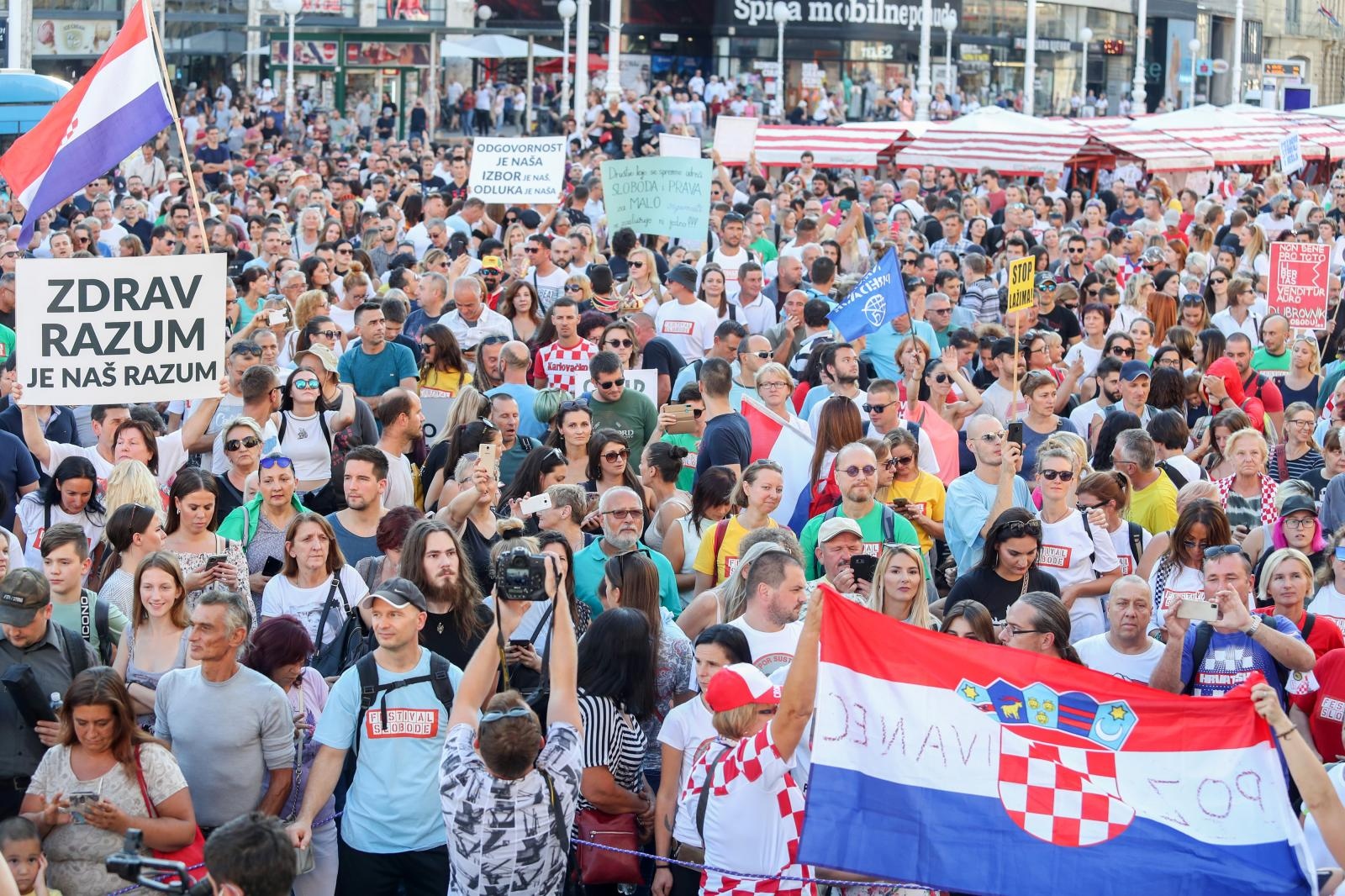 Since COVID-19 appeared, unprecedented measures which restrict fundamental rights and freedoms have been imposed, and our goal is to preserve the achievements of a democratic society in which one cannot tolerate decision making based on panic and propaganda or on copying instead of examining, the organiser said.

They insist on the preservation of human rights, freedoms, knowledge, solidarity, and mutual respect, and wish to say that health is psychical, physical, emotional, and mental, not just the corona level.

In the morning, participants organised events accompanied by music outside nursing homes, where they asked residents to open their windows and balconies to hear that they are not forgotten and to cheer them up with music and messages of encouragement.

Police say rally has been announced

Zagreb police told Hina they were notified that a public rally called the Freedom Festival would be held and that they would see to it that it proceeded safely.

Assistant Interior Minister Damir Trut said on Friday the protest’s organisers committed to adhering to all epidemiological measures stipulated by the Croatian Institute of Public Health.

The Croatian Medical Law Association (HUZMP) said on Friday it was appalled by the announcement of the Freedom Festival because, according to a press release, it was a protest against individual and societal health organised under the slogan of freedom and that this meant it was about deception and demagoguery.

“At a time when the world is facing the highest ever numbers of coronavirus cases and dead when hospitals in Croatia are quickly filling up with everyday hospitalisations of new patients, the HUZMP is appalled by the announcement of a so-called freedom festival,” the press release said.

What freedom of speech are we talking about and who will cultivate it if there is no general safety and health, and who will enjoy freedoms if the processes and institutes of medical science, prevention, and treatment are being belittled, the HUZMP asked.

Health Minister Vili Beros on Saturday commented on the Freedom Festival in Zagreb against coronavirus restrictions, saying he respected everyone’s freedom and rights but that he could not support an unscientific approach to COVID.

Beros posted on Facebook that as a Christian Democrat he respected everyone’s freedom and right to their own opinions on all important life matters. “Croatia is a democratic country in which freedom of opinion and expressing views is nurtured.”

However, he added, “as a doctor and a humanist, as the Croatian minister of health, I can’t support an unscientific approach to COVID-19 and methods which enable it to spread among citizens, which the organisers of this rally advocate and promote.”

Beros said he believed “most Croatian citizens have seen that all the measures we have taken have ensured a high degree of protection from the infection and its consequences.”

“All temporary restrictions have had only one goal, to protect the health and lives of Croatian citizens. We have succeeded and are succeeding in that.”

The minister said everyone “has freedom of choice, but they must also be aware of all the consequences of their decisions, both for themselves and for all the people around them.”