“This is our joint victory. The war belongs in the past, let’s look toward the future, the future is in our hands,” Croatian General Ante Gotovina told more than 100,000 flag-waving Croats on Zagreb’s main square exactly one year ago today on 16 November 2012. Gotovina (58), together with fellow General Mladen Markac, had just had his 24-year jail sentenced quashed by The Hague Court earlier that day for war crimes following Croatia’s 1991 independence from Yugoslavia…

So what has the man who became a popular folk hero in Croatia been up to in his first year of freedom since more than 11 years?

November 16, 2012 – Flies from The Hague in the Netherlands to Zagreb, Croatia 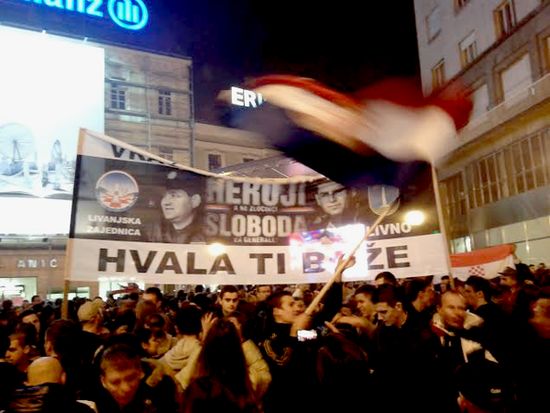 100,000 turn up to Zagreb’s main square to welcome Gotovina

November 23, 2012 – Gotovina is made an honorary citizen of the Dalmatian city of Split by then Major Željko Kerum.

December, 2012 – Gotovina, together with his son Ante, pays a visit to Dinamo Zagreb football club where he was hosted by the club’s chairman Zdravko Mamić. Gotovina visited to personally thank the club for all their support during his 11-year fight for freedom. Dinamo Zagreb in 2006 donated the gate proceedings from its derby with Hajduk Split towards Gotovina’s legal costs.

January, 2013 – Gotovina sends the Croatian handball team a SMS which coach Slavko Goluza says was key factor in his side beating France in the quarter-final at the World Handball Championships. “Dear friend, dear guys, you defend the colours of the homeland tonight on the parquet (floor). Knowledge and heart you have, just be brave to reach your goal. We are with you, Ante Gotovina and family,” read the message.

January, 2013 – Gotovina decides to venture into the business world, despite many thinking he would head into politics. Gotovina forms the tuna farming company Pelagos net farma, which will farm tuna in the Zadar region.

August, 2013 – Gotovina is the main star of the historic Sinj Alka tournament and is presented with the prestigious honorary knight award from the Alka Association, and also is made a honorary citizen of Sinj. Gotovina enjoys some summer relaxation in Zadar and Hvar.