My name is Arijana, and I’m 24 years old. After finishing college, my boyfriend and I decided to travel around South East Asia for seven months. We started in January when coronavirus was already present, but nobody thought it could become a global threat as it was still mainly in China. Our first stop was Bali, where we stayed for a month. After that, we continued to Vietnam. The plan was to travel around for three months, but things didn’t work out as we planned. 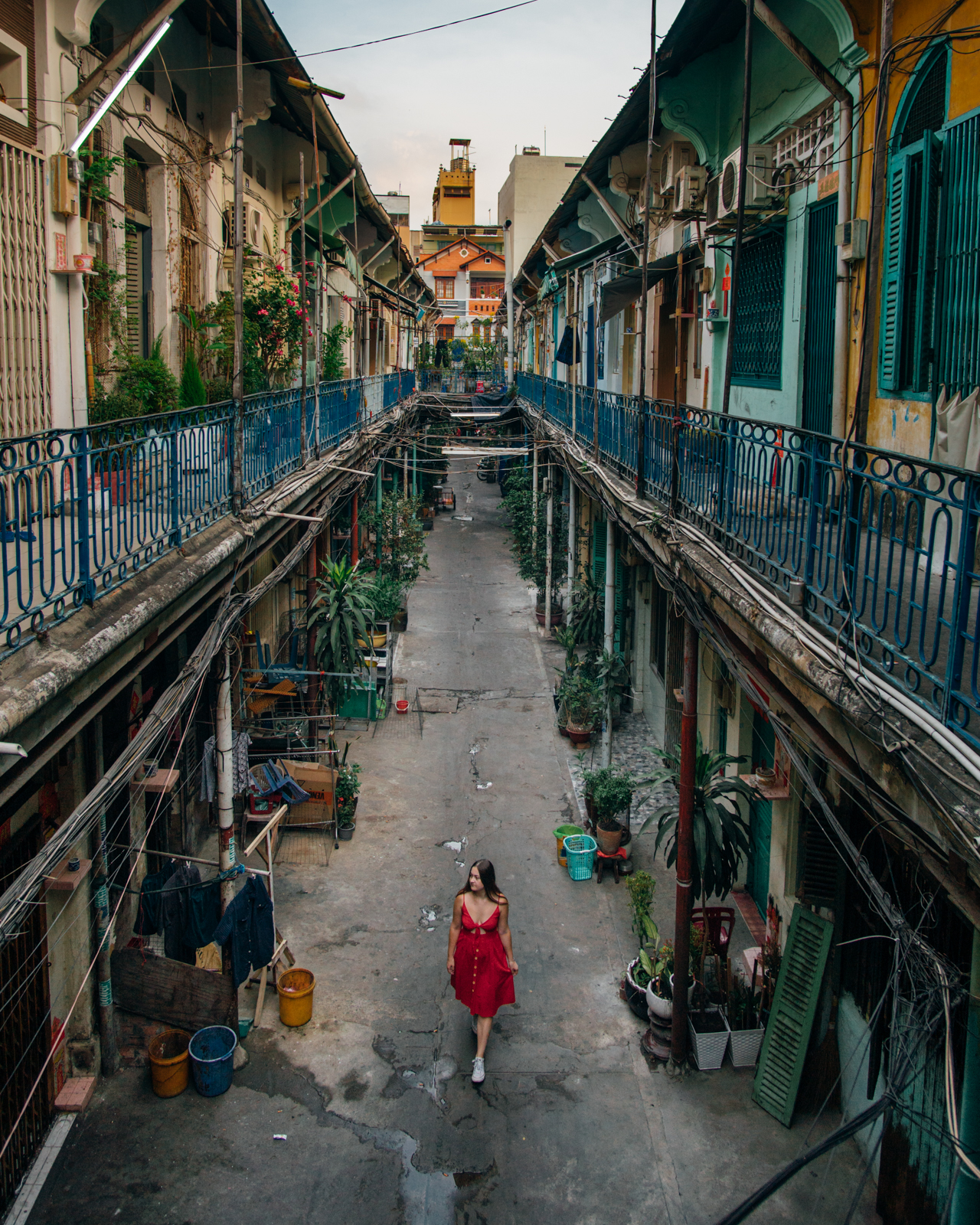 First two weeks of our Vietnam trip were completely normal, and we explored freely

At the moment, we are ‘stuck’ in Da Nang, the beautiful coastal city in Central Vietnam, known for its sandy beaches. It’s also known as the city of digital nomads, and that’s why we chose to get ‘stuck’ here. We rented a house where we’re staying for another month, at least. Social distancing measures are continuing until 22nd April, but there is a high chance that this will continue until the end of the month.

The first two weeks of our trip were perfect. When we entered the country, Vietnam had 0 active cases of the virus. We went around Ho Chi Minh City and explored Mekong Delta. The only unusual thing we experienced was the temperature check before entering the War Museum. 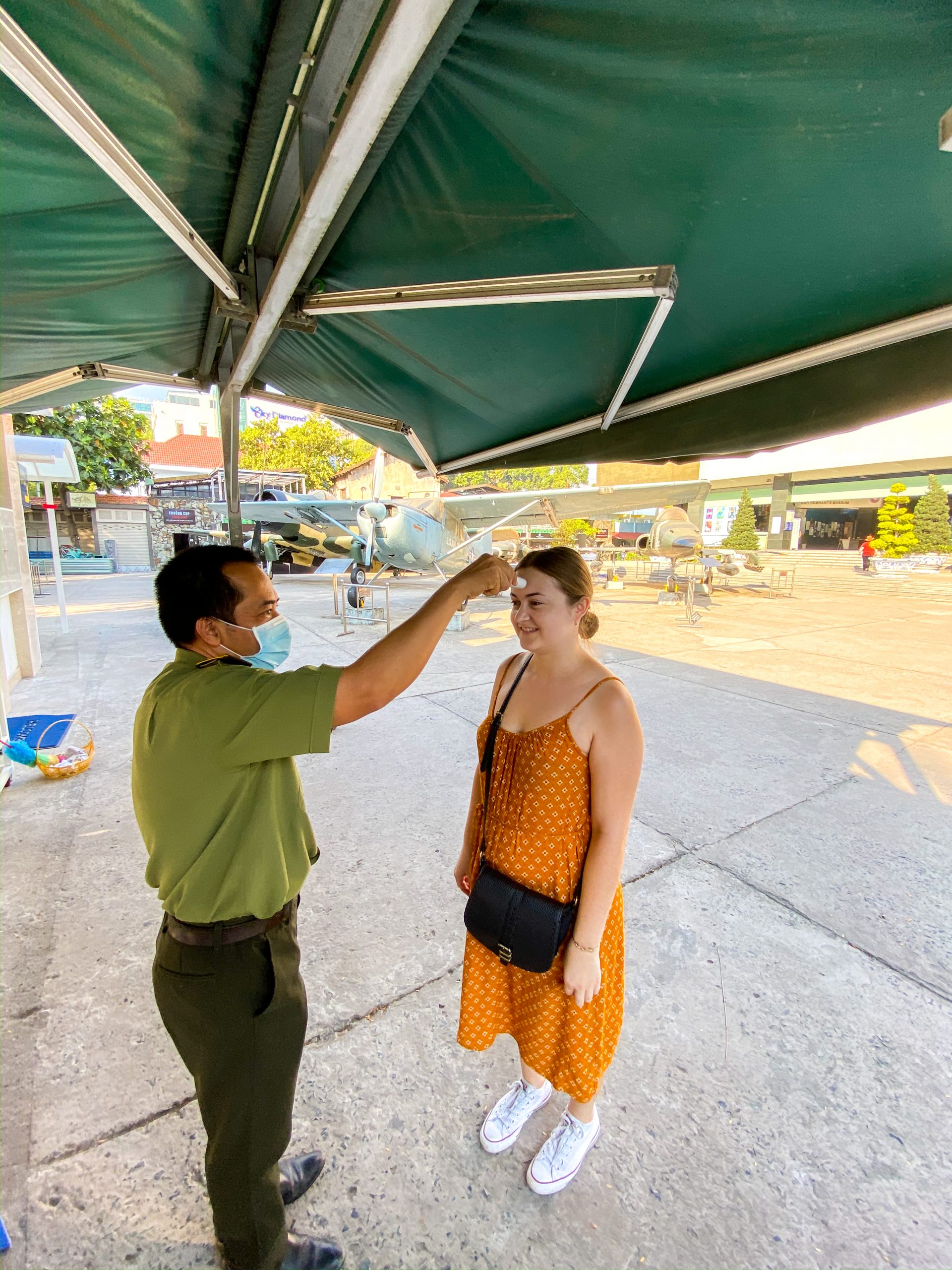 When we arrived at Mui Ne, our third stop in Vietnam, things started to change. Cases were rising in Europe, and soon the first new case showed up in a town 17 kilometers away from us. Slowly more cases were confirmed, and the corona was officially back in Vietnam. The lively town full of tourists slowly started closing down. Some restaurants closed, hotels stopped taking in tourists, there were fewer people, etc. 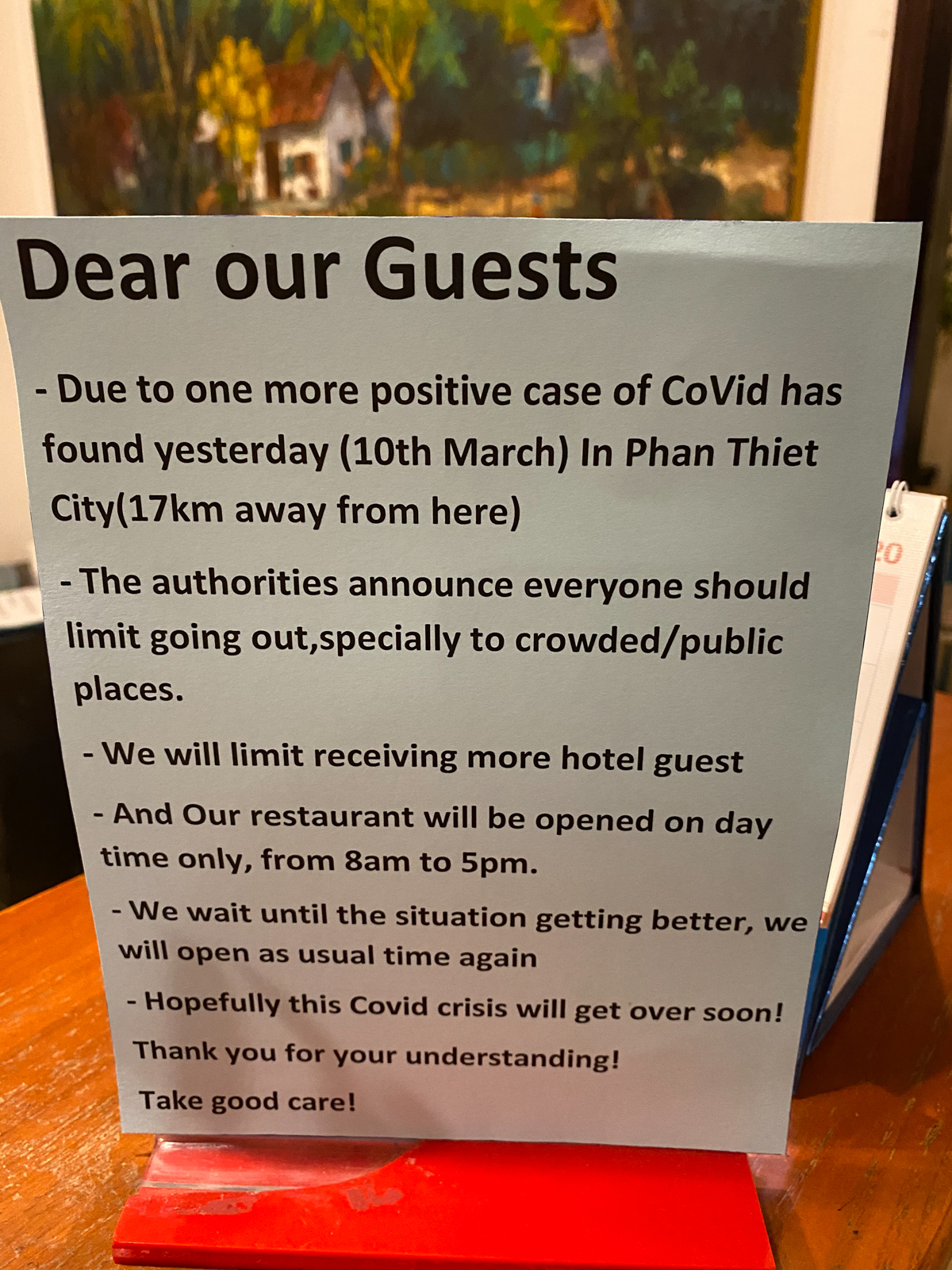 Hotel announcement about the new coronavirus case close to our town

As the situation here in Vietnam wasn’t that bad yet, we continued our trip to Dalat. There the problems started. We were denied entry to one local restaurant because we were foreigners. People on the street would put the mask up when we were passing by etc. They were afraid of us. Many new cases came from abroad (whether it was from foreigners or Vietnamese coming back from overseas), so I can partially understand their behavior. However, we didn’t feel comfortable, so most of the time, we stayed in our apartment. The time for the big decision came: should we stay in Vietnam or go home? The clock was ticking: the borders started closing, the situation in Europe got terrible, there were fewer and fewer flights each day. After long talks with our families and colleagues in the same situation, we decided to stay.

Why? Firstly, flying in this situation didn’t sound appealing to us. Many confirmed cases in Vietnam were connected to flights. Secondly, we already have our ticket back to Zagreb in September from Bali. This would be an additional financial cost that we couldn’t afford. The tickets were too expensive, and nobody could guarantee that the flight wouldn’t be canceled. What if we got ‘stuck’ at some airport or the flight got canceled, and we didn’t have money to buy another ticket? It was too risky. Thirdly, if we did come back to Croatia, self-isolation of 14 days was mandatory. The only place we could go to was my parents’ house. We didn’t want to risk it as we could put them in danger. And lastly, the fact that my boyfriend is from Slovenia, which was already completely closed, made even more problems. 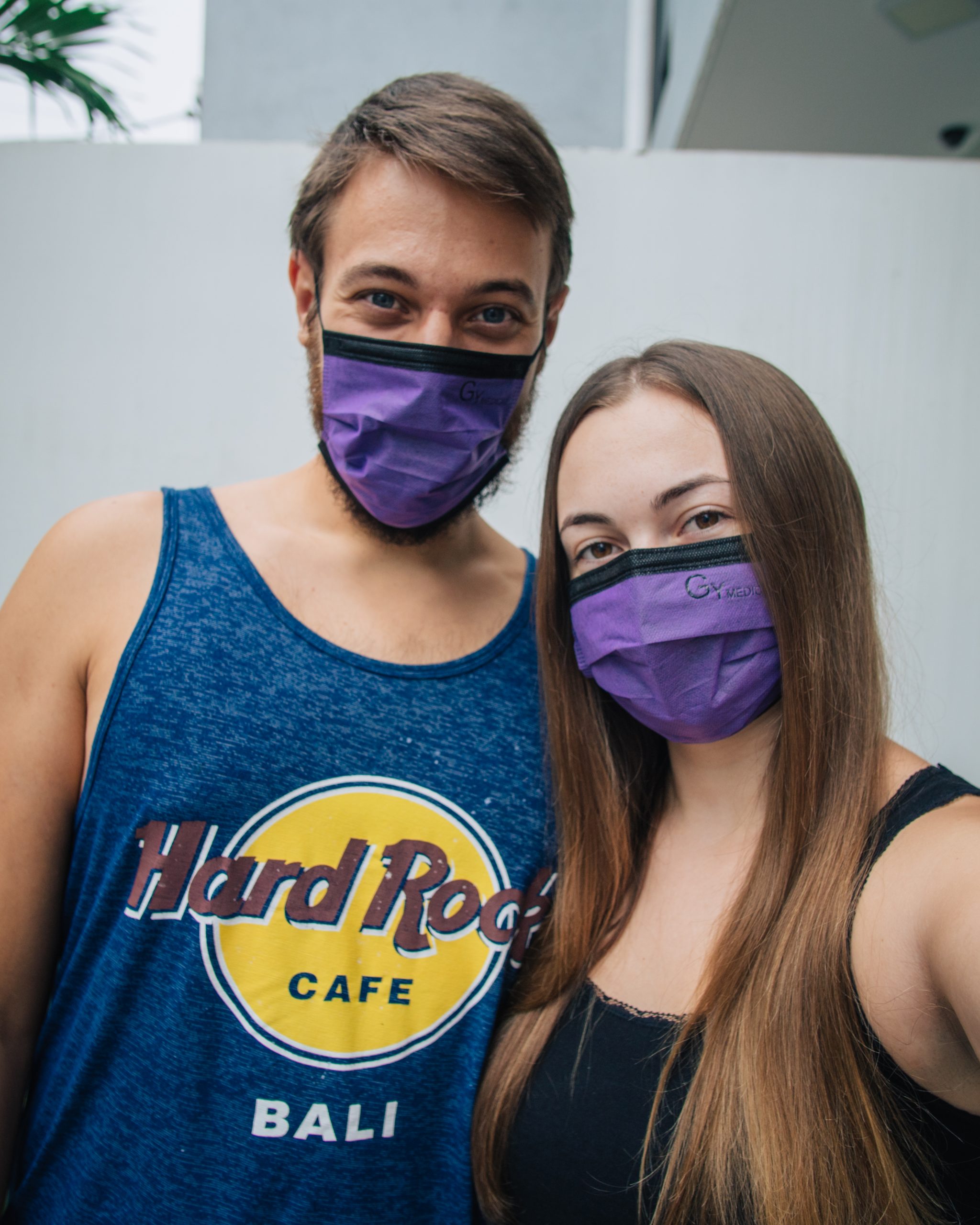 There’s no going out without a mask anymore

After our final decision to stay, we had to act fast. It was a matter of the time when the country would go on lockdown. That meant we had to choose the place we want to ‘get stuck in.’ We chose Da Nang. It’s a big city, full of digital nomads. That meant we would have everything we needed for a normal life.

To get there, we took a 6 hours bus to Nha Trang where we stopped for a few days. The situation there was much different than Dalat. Everything was full of tourists (mostly Russians), many people didn’t wear masks, the beach was full of people. We weren’t sure what to think about that because the rest of the country was in a full-on panic, while here everything was so relaxed.

It took another 10 hours to reach Da Nang with the train. People were still scared of us. The Vietnamese man in our cabin was terrified when he saw that we’re supposed to join him. It took him a bit to accept it. Out of respect to him, we wore our mask the whole 10 hours. 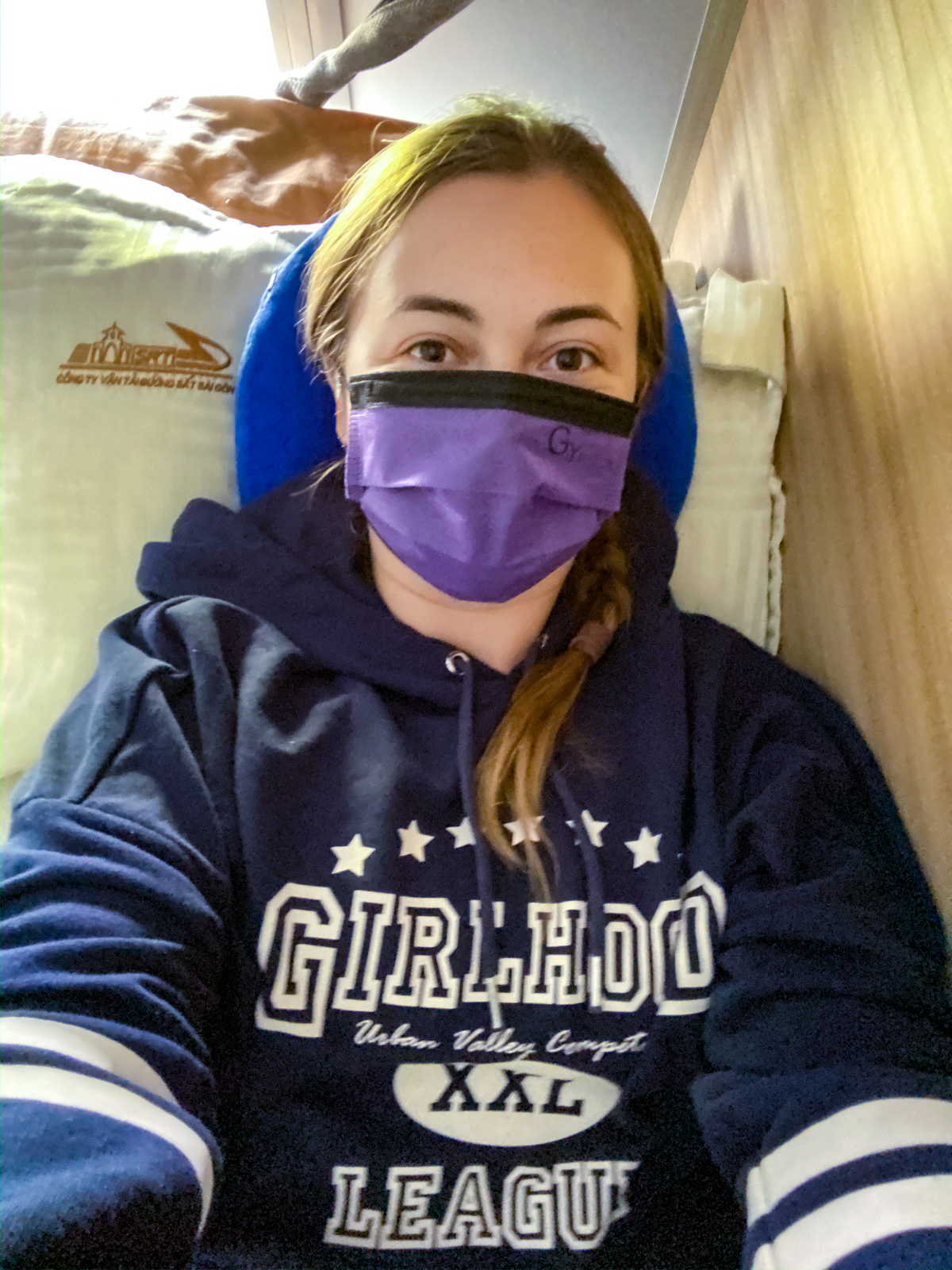 We wore the masks during the whole 10-hour train ride 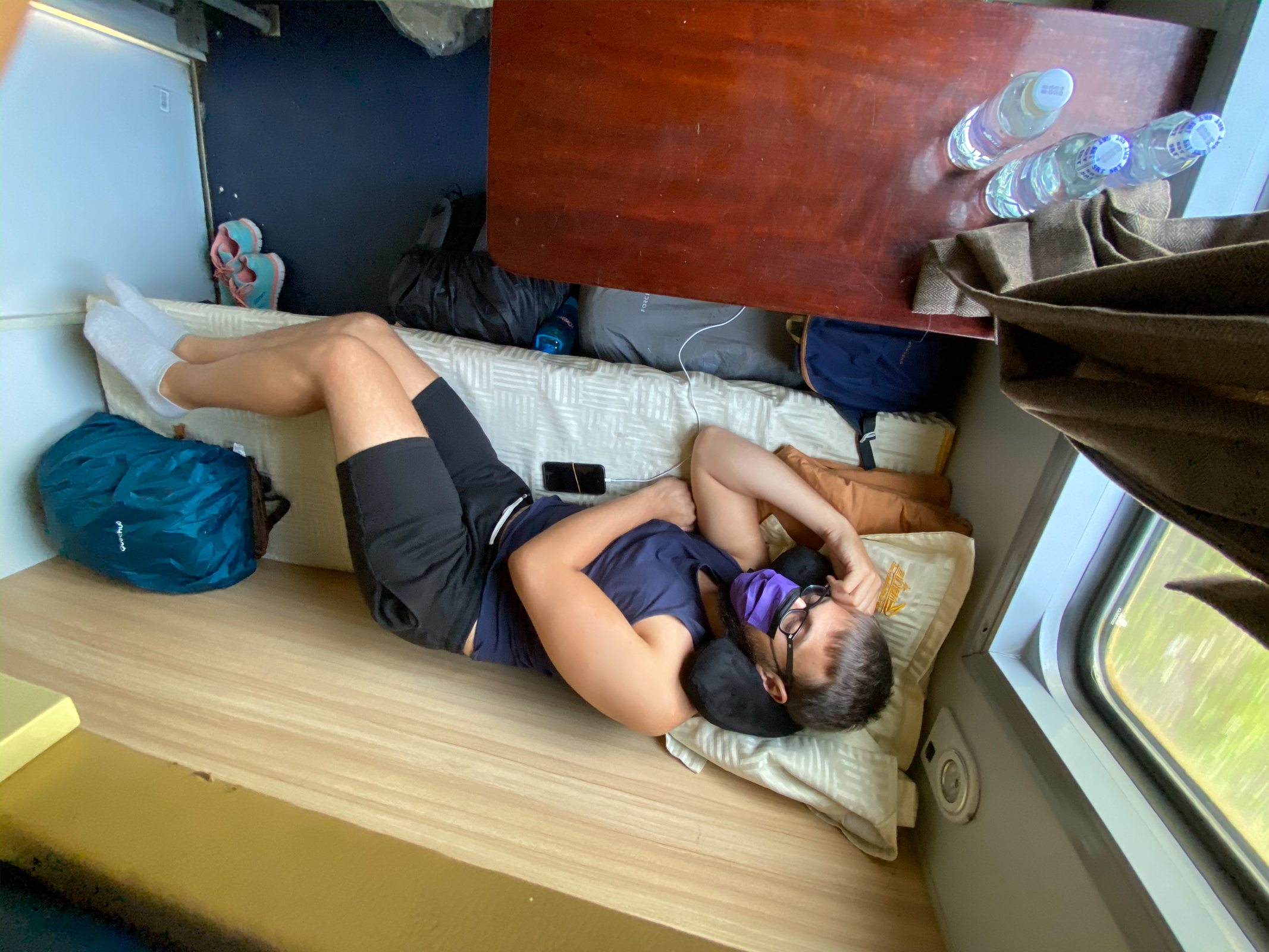 There was a shocking scene when we entered the Da Nang train station. People in full-on blue suits accompanied by police were waiting at the entrance. One guy held an English sign just for us as we were the only tourists on the train. I was so scared when I saw them as I didn’t know what’s going on. My first question was: ‘What will they do to us?’. But I have to mention how kind and understanding they were. It made me much calmer. All of us went through a temperature check and hand disinfection (two times). As foreigners, we had to fill in some documents. There were questions about which places we visited, where we are staying, when did we enter Vietnam and how, etc. 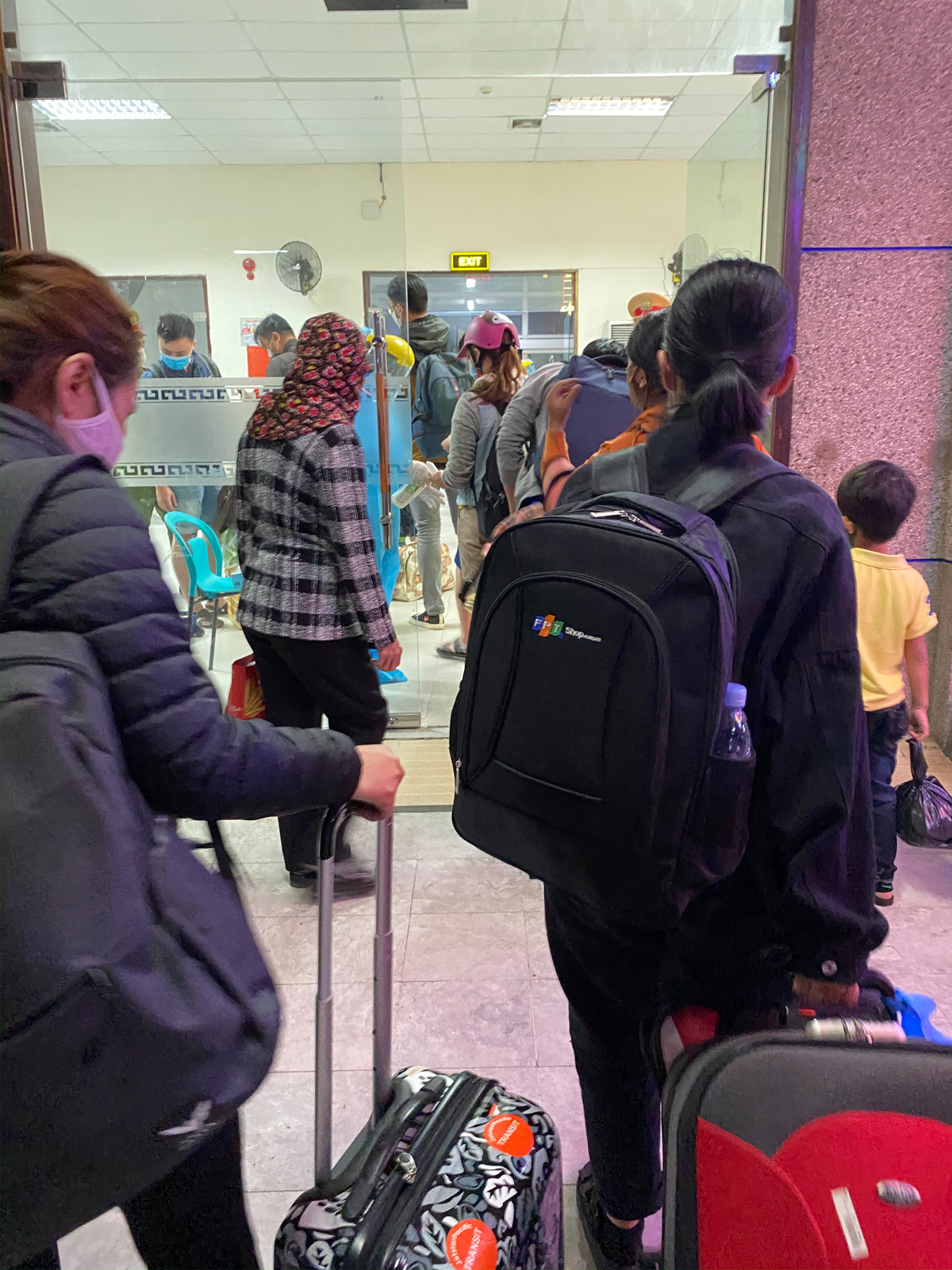 We also had to download their Health Declaration app and fill in our information. Every day the app asks us if we’re feeling well or have any symptoms. That way, they can track how we are feeling. If anyone needs any help, they can react much faster than in other countries. Each person is identified with a certain number, which can be scanned through a QR code. 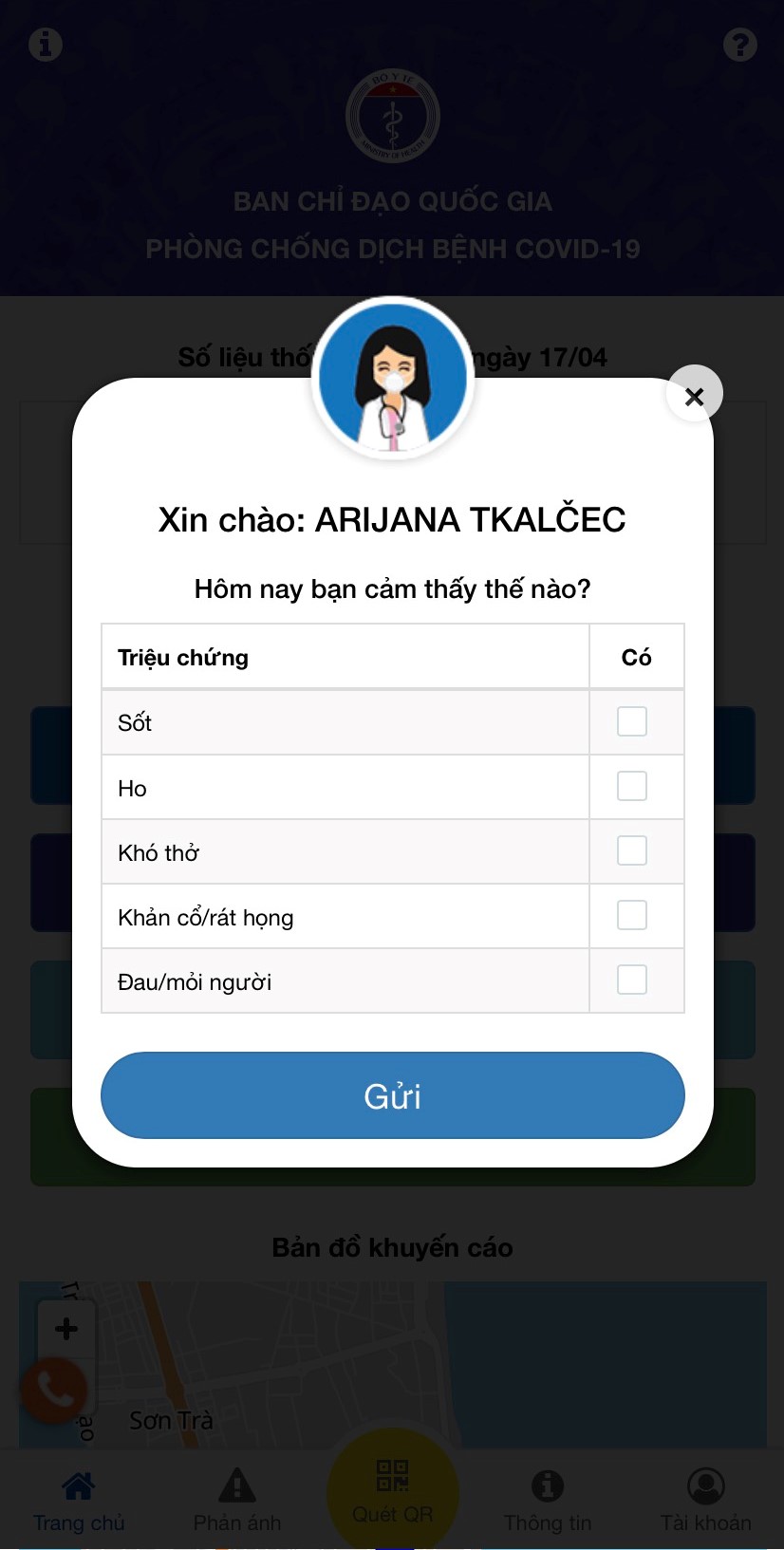 ‘Vietnam Health Declaration’ app that we had to download

We came at the last minute. The next day the city was closing down, and we barely managed to find suitable accommodation for us. We got lucky, though! According to the government’s order, many accommodations didn’t accept foreigners anymore. They wanted to stop the unnecessary movement. Now we’re waiting to see how the situation develops. The social distancing measures (that’s how they officially call this, although it’s not that different from a lockdown) are being enforced until 22nd April (for now). We mostly spend our time in the house. Luckily we have our kitchen, so we cook every day. We go to the store once per week and have no problems with finding food (people don’t stack up on groceries here like in Croatia).

The beach is closed. It’s not possible to get near it as the police and lifeguards are patrolling the area. Even one part of the main road next to the beach is closed for walking or jogging. That’s why there are many people on bicycles now. That’s the only way to get through some places. The neighboring streets are now much busier as people are running and exercising there because of the ban. Masks are a must, and if you don’t wear one, you’ll get a fine. All public places, such as stores, have a person who is disinfecting your hands before getting in. The temperature checks on the entrance are a normal thing now. As of 16th April, restaurants are open for takeaways and delivery only. Official or online taxies are not allowed to operate; only scooters can. 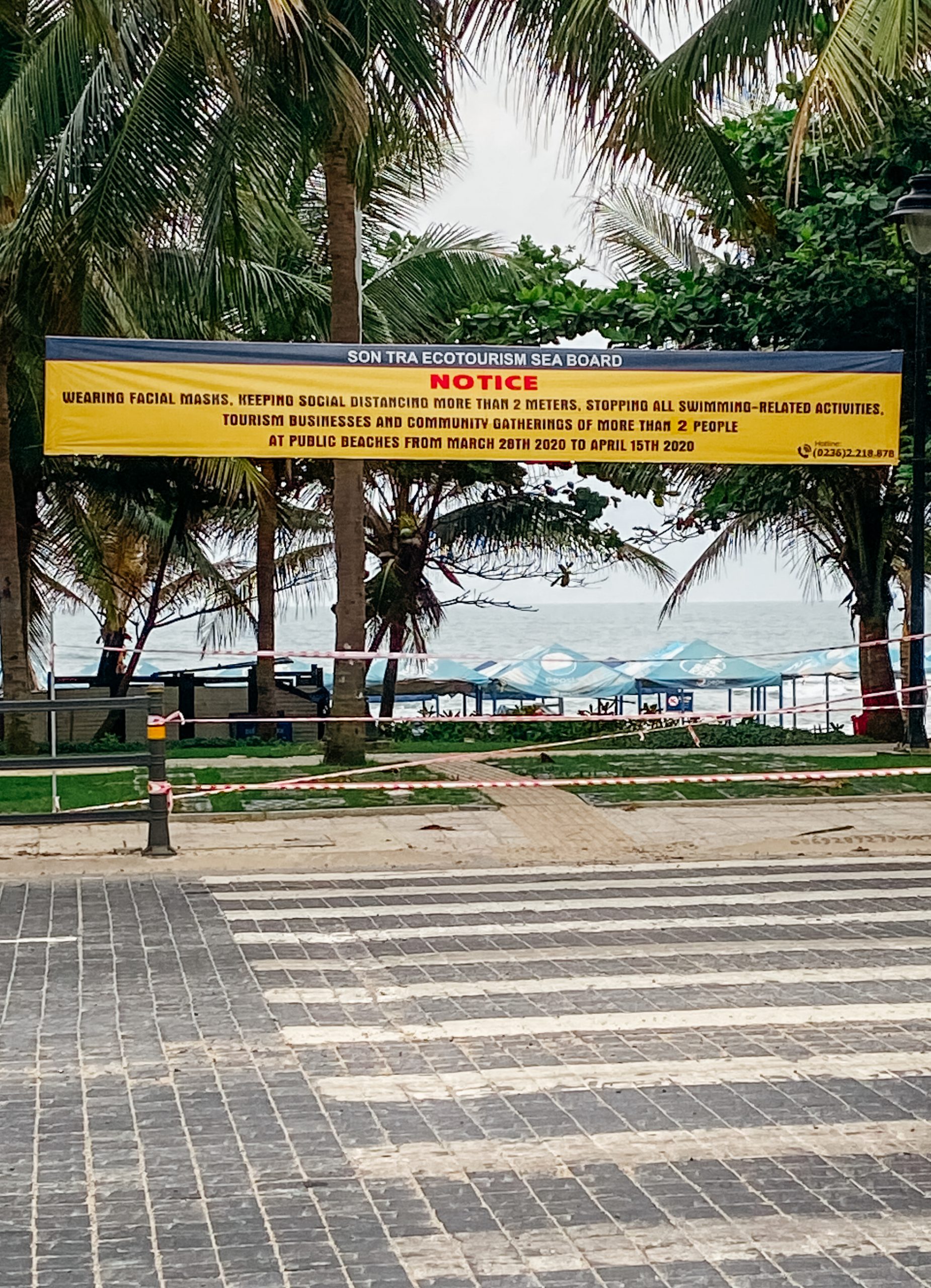 Beach is closed. Every few meters there are signs with an explanation of social distancing measures (on both English and Vietnamese) 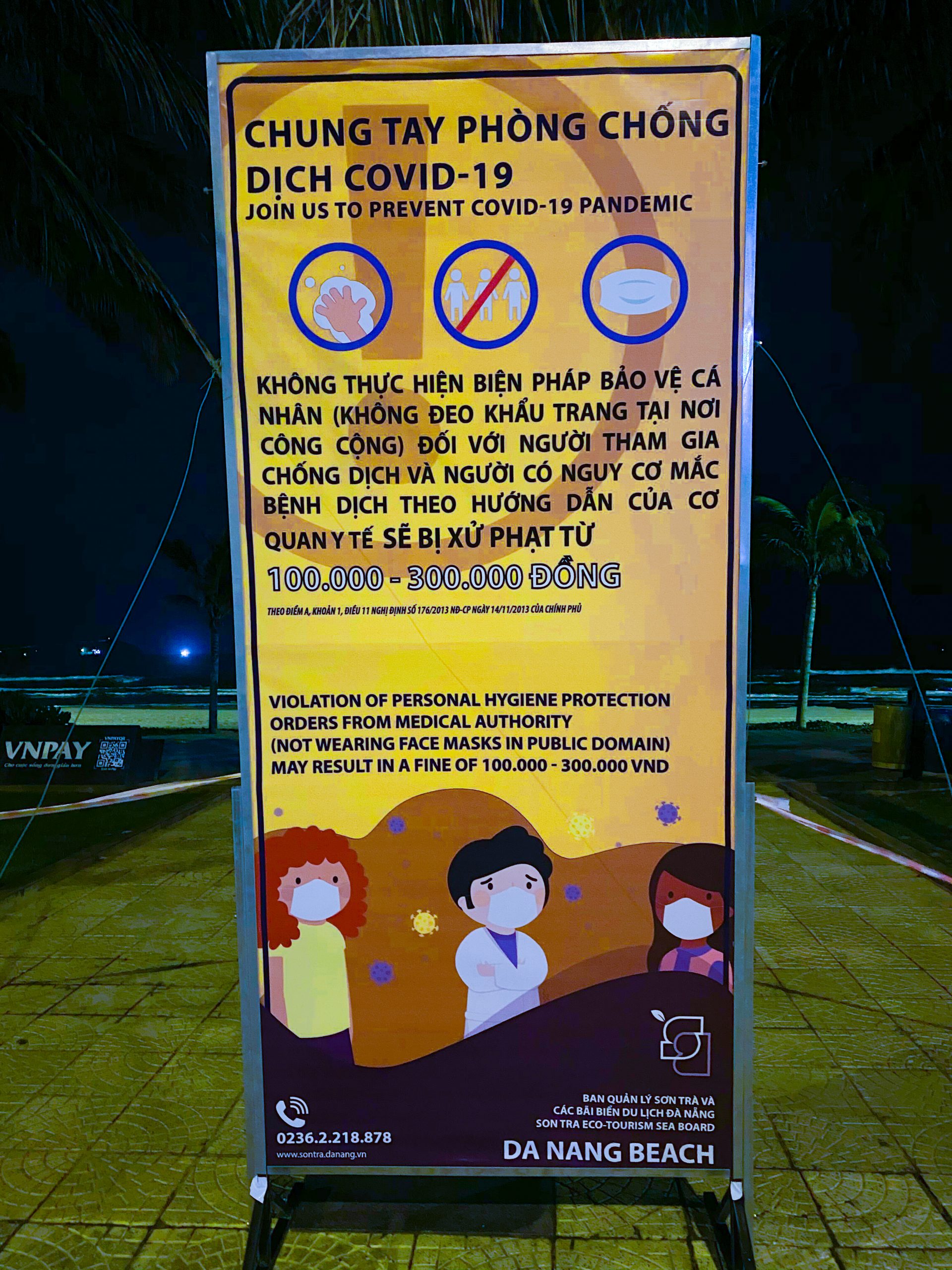 Not wearing a mask in public can result in fines

Even though there are strict measures, we’re still allowed to go out. However, we don’t go that much during the day because we don’t want to be bothered. We’re in a bit of a touristic part of the town, so the measures here are a bit stricter. That’s why we go for a walk around 11 pm. Then we can go to the beach, and there’s no people or police there, which makes it perfect for us.

Video below – the audio with social distancing measures explained was played on the path next to the beach all the time. Now that path is closed

According to the last statistics, Vietnam has 70 active cases (268 in total, 198 recovered). It’s one of the countries that’s handling this situation the best. That’s why we feel safe here for now. The government is active in educating its citizens about the virus and hygiene (especially washing hands). They even made a viral song about the virus and how to act in the situation. There’s also a choreography with dance moves that show the right way of washing hands. I find that very helpful as they made it interesting for all ages to watch. They also reacted very fast and are trying to have everything under control. The interesting fact is that there are 0 deaths reported. I’d say that’s partly because their people are more fit than ours. We’ve seen older people in better condition than we are. They exercise every day and are very active. Most wake up at 4, the latest 5 in the morning, and hit the beach to do all sorts of activities (badminton, dancing, yoga, open gyms).