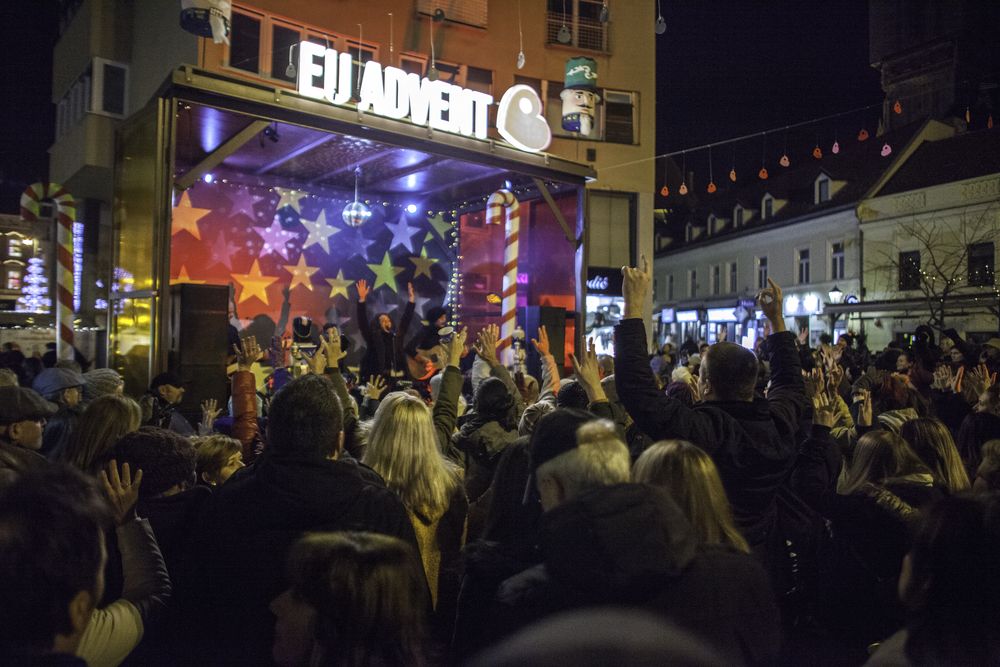 Zagreb, December 4th, 2019 – The popular Advent on European Square in the heart of downtown Zagreb officially kicked off on Saturday, in a great atmosphere with a gig by electro-acoustic pop band Detour.

Famous for its quality and urban program, EU Advent will be providing a refreshing offer of gastronomic, cultural and entertaining conten every day until January 8th in Zagreb. These five attractive features are worth visiting this Advent location: 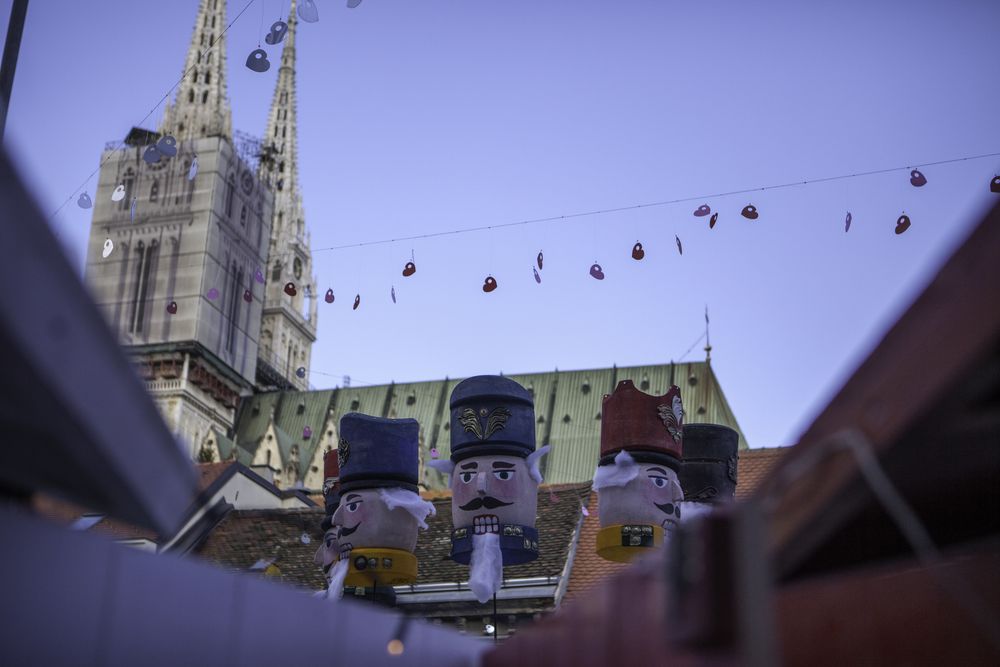 This year’s visual setting follows the well-known image of the EU Advent – a modern and urban event, featuring an excellent social and cultural program with a twist that brings together artists and various creative people. 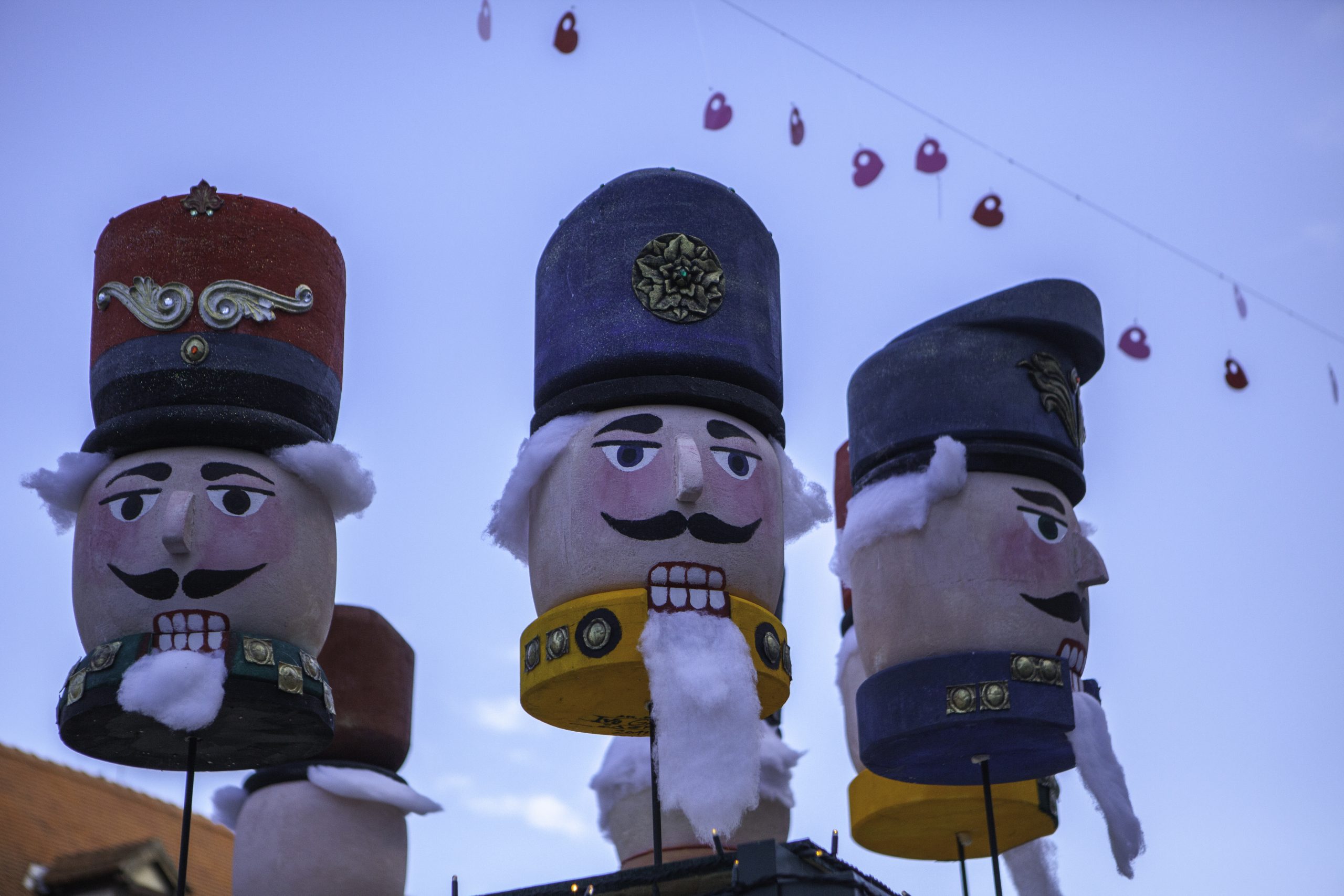 Eight large Nutcracker sculptures decorating European Square were made for the occasion by academic sculptor Ivo Gašparić, who works as scenographer at the Croatian National Theater (HNK). He also co-authored the scenic sculptural works for HNK’s hit ballet play “The Nutcracker”. Barrels turned into tables were decorated by Marko Dajak, a young artist and student at the Academy of Fine Arts, actively involved in the local street art scene. The recognizable thousand hearts hanged above the European Square were designed and illustrated by Marko Matošić, manager of the alternative rock band K3P, who signed numerous sets and scenographies. 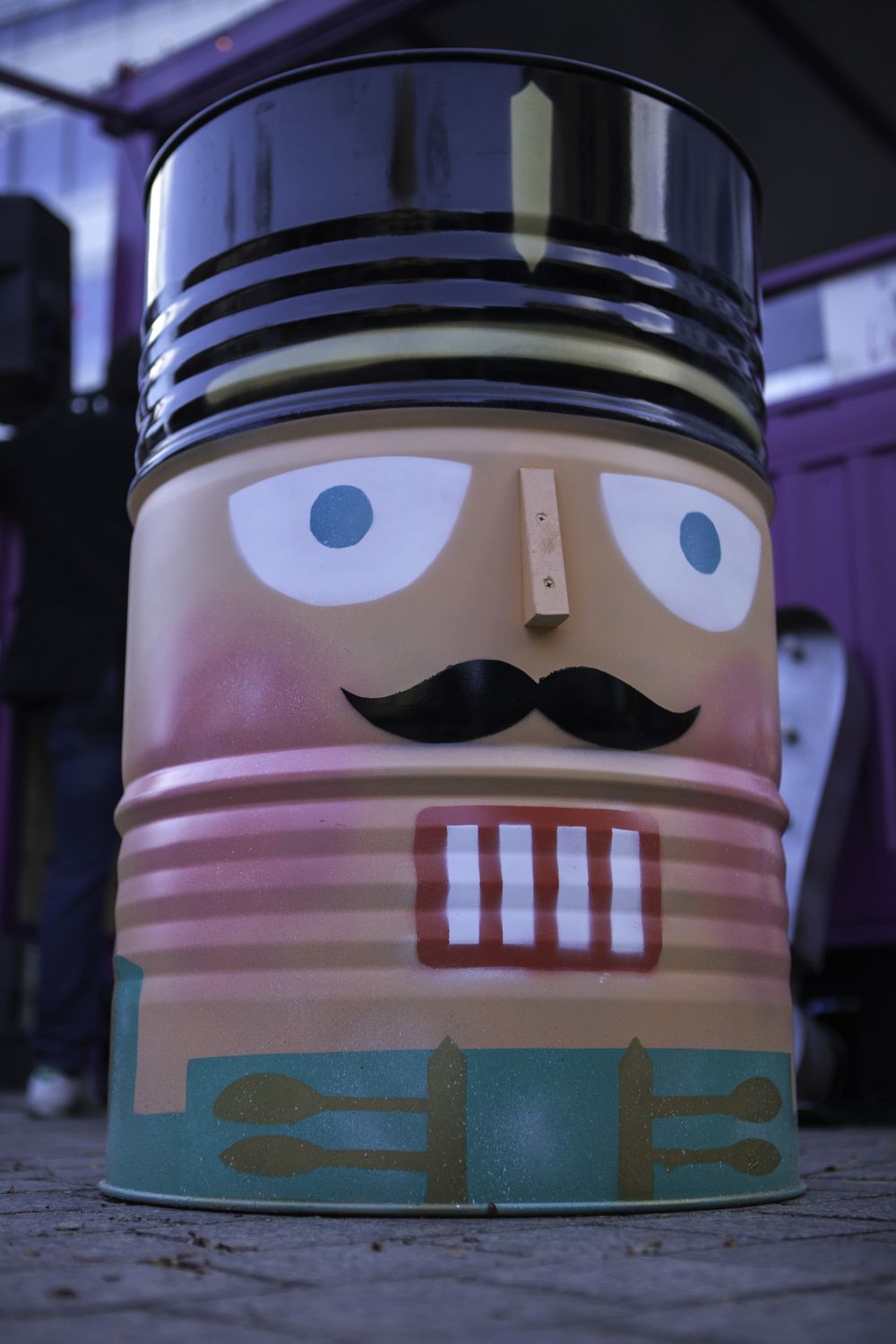 If you love good food, you should not skip the rich gastronomic offer at  European Square – maybe one of its little houses hides the most delicious bite of this year’s Advent. The admirers of old school recipes and traditional treats will be delighted by the offer of the Mali mlin (Little Mill), which offers a variety of savoury platters, the famous Turopolje zlevanka in its sweet and savoury variations, as well as the lovely gingerbread cookies.  Let it Be will win you over with the most impressive Advent offer of the local delicacy called štrukli: besides the selection of interesting sweet variations of this popular dish (with nuts and mint honey, cranberries and blueberries), make sure to try the Cardinal štrukli with porcini mushrooms, chanterelles, cashews and cheese, gratinated with sour cream. 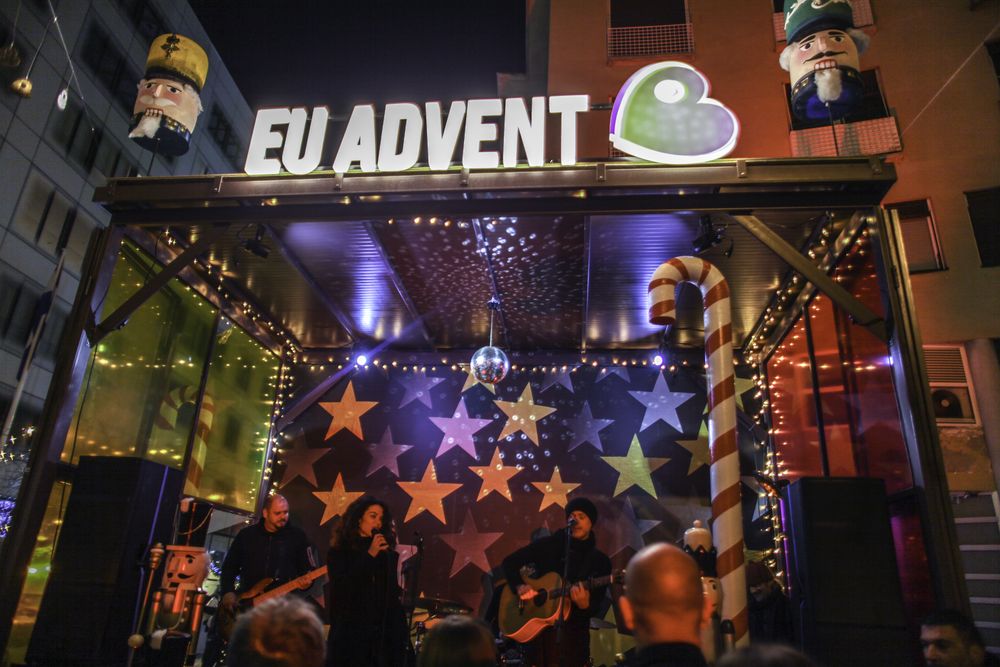 The inebriating scents of cinnamon and rum aromas will take you all the way to the Čarobni Kutak (Magic Corner), whose rich offer of sweet and savoury snacks is crowned by the “Apples in bathrobe”, served in vanilla and chocolate sauce. When it comes to dessert, be sure to try the hazelnut apple, chocolate orange and cardamom tarts made by the patissiere Ivana Čuljak, enriched with Botanica spices, served warm or cold, with a scoop of ice cream. 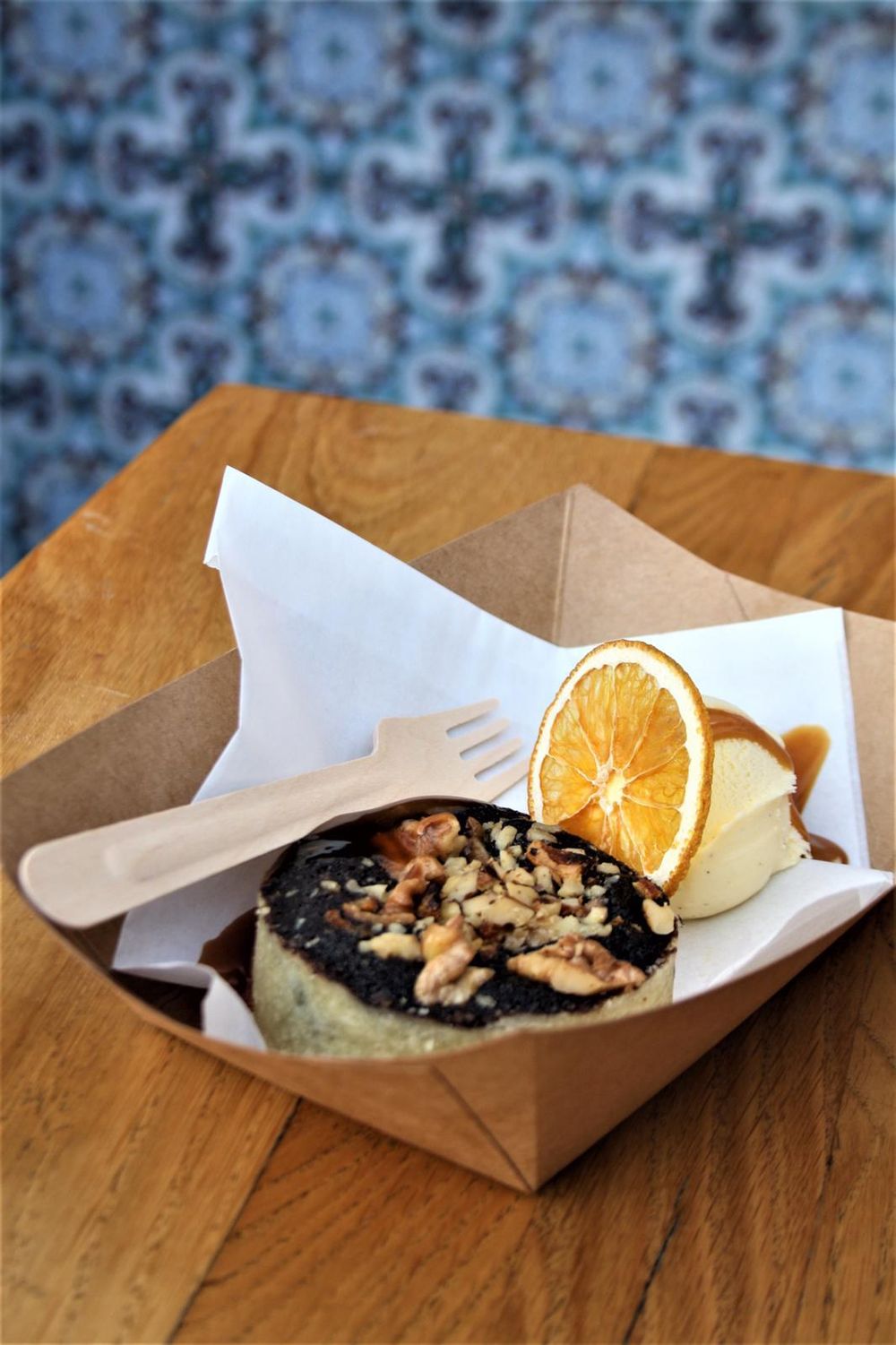 In addition to the traditionally rich offer of mulled red and white wine, the atmosphere of the warmest Advent in Zagreb will be further heated by the warm Most unusual bazzar by Botanica punches, with Hendricks gin, Hendrick`s Orbium, Flower Power, brandy and rum as the base. There is also Viška priča (The Vis story), which offers the famous delicacies from the island Vis, as well as 14 types of exclusive brandies and wines from the island.

Social Grilling with Rujana Jeger – On literature, music and dogs

At the beginning of each week of EU Advent, in the afternoon and in the evening, editor, author, journalist and archaeologist Rujana Jeger will host local writers and authors with whom she shares the passion for music.

This concept of informal socializing called Social Grilling will provide a framework for relaxed conversations, a music listening room and poetry and prose public readings. The guests – Edo, Ljiljana and Sven Popović, Predrag Ličina, Krešimir Pintarić, Ivica Prtenjača, Zrinka Pavlić and Ivana Bodrožić will crack open the doors to their musical treasury. On Tuesday, December 3rd from 5 PM on this year’s first issue of Social Grilling, Rujan Jeger talked with the writer, editor and publisher Boris Popović (“Vuizm: Architecture made of flesh and blood”, “All Beautiful, Infinite and Finally Dead”) with a brief introduction of his new novel, followed by the promotion of the magazine on dogs Njuškica. Along with giveaways, a free copy of the magazine and talks about the animal fear of fireworks, there will be a soundtrack made of music loved by dogs. 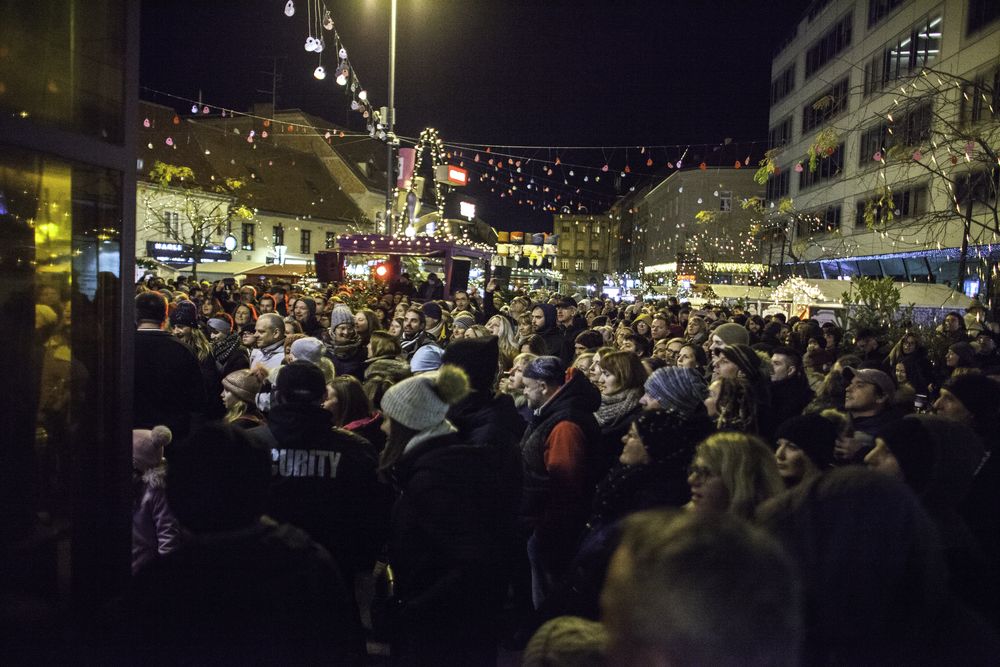 Also, do not miss the Silent Disco on Fridays from 11 PM, and Kontrapunkt & Imogen on Sundays from 5 PM, featuring DJ gigs by Dus, Ilija Rudman, Eddy Ramich, Alen S, Antonio Zuza and Zak. If you are into interesting questions and attractive rewards, you can turn on the Advent Quiz mode on Wednesdays from 7pm under the baton of Silvio Pleština and his right-hand man, DJ and music editor Davor Frajman. Also, the Zagreb based radio station Yammat FM will have its Advent Studio right on the European Square, from which their program will be broadcasted in prime time. There are also the traditional Christmas and New Year’s Eve parties with electronic music treats.

Other kinds of concerts – Crazy P and Elijah Ludwig 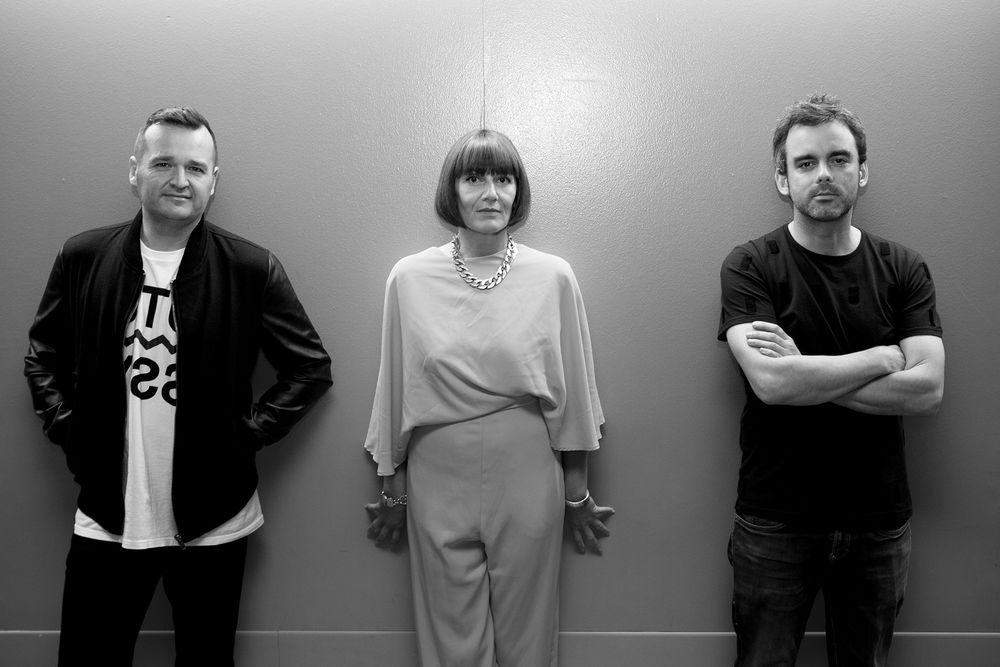 After 30 million album streams, sold out concerts in Manchester and London, appearances at Bluedot Festival, Festival number 6, Love International and the Boiler Room in Bali, on December 7th he British band Crazy P will fill Zagreb’s European Square with electronic and melodious rhythms. They are coming to the EU Advent with their new album Age of Ego, which will charm the fans of Fleetwood Mac, Peter Gabriel, Grace Jones, Arthur Russell and Prince, while delivering modern sound and layered club beats with a stamp of quality. Founded 20 years ago in Nottingham, Crazy P stands out for their musical skills, selection and quality production, but what sets them apart most is their unique musical signature and incredible live performances filled with energy, humour and interaction with the audience.

Belgrade poet, musician and entertainer Ilija Ludvig is a distinctive singer-songwriter and representative of the Belgrade underground scene, known for atmospheric concerts that always tell (at least one) story. On Saturday, December 21, enjoy in his interesting music world with a touch of blues and country. 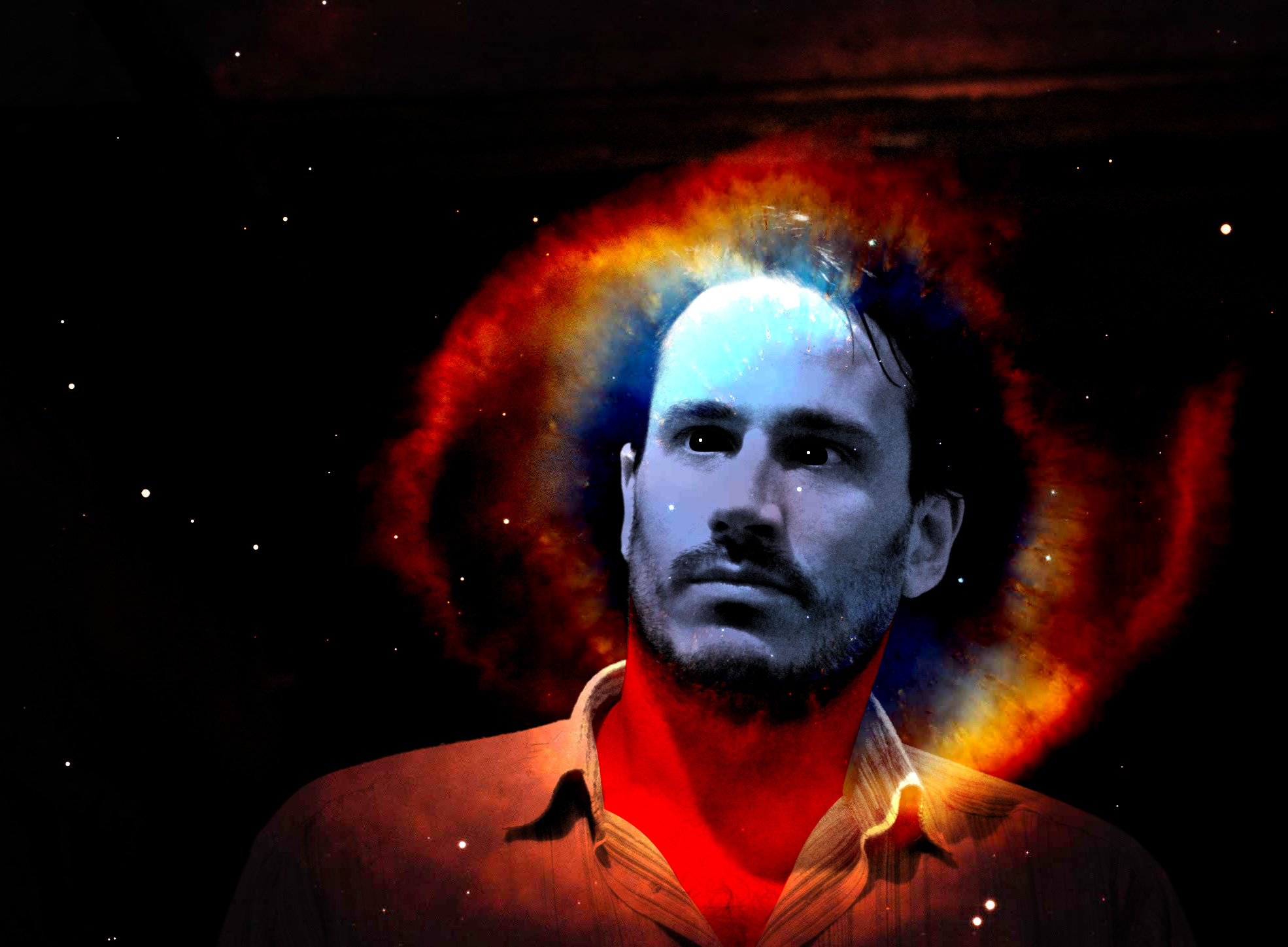 In addition to Detour, who officially opened this year’s EU Advent, the gigs by Crazy P and Ilija Ludvig, there will be also Luce who will present an hommage to the divas of soul music, entitled Drugo lice Luce on December 14. The duo known for their impressive and stylish music – Meritas, will be on stage on December 28th. Don’t miss it!

At EU Advent you will have the opportunity to participate in an unusual toy market, organized by the Ivanić grad Toy Festival. It is a kind of toy stock market within which you can bring and exchange toys that you no longer need, or donate toys and bring Christmas joy to someone who needs it most. This charity project is also envisaged to raise public awareness, especially among the youngest, of the importance of reusing old objects and protecting the environment.

A detailed EU Advent program can be found on the FB page: http://www.facebook.com/europskitrg

Advent on European Square is supported by the Zagreb Tourist Board.