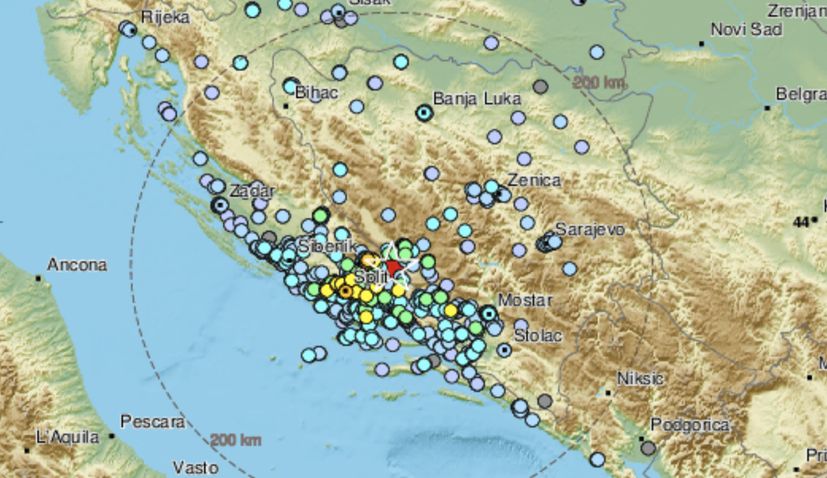 ZAGREB, October 6 2021 – An earthquake initially reported as measuring 5.1 on the Richter scale which hit Croatia’s Dalmatian coast on Wednesday night, has been scaled down.

The European-Mediterranean Seismological Centre had initially said the earthquake measured 5.1 on the Richter scale with the epicentre some 40 kilometres northeast of Split with a depth of 5 metres.

However, the Croatian Seismological Service has reported more accurate details some 45 minutes later.

“Tonight, on October 6, 2021, at 9:57 pm, seismologists from the Croatian Seismological Service recorded a strong earthquake with the epicentre on the border with the Bosnia and Herzegovina, near Buško Jezero, 20 km east of Sinj. The magnitude of the earthquake was 4.6 according to Richter, and the intensity at the epicentre of the VI degree of the EMS scale. According to previous data, no material damage was recorded. The earthquake was strongly felt in Croatia in the wider area around Sinj, Split, Makarska and its surroundings,” the Croatian Seismological Service said.

A strong tremor was felt in the wider Split area with witnesses reporting that the quake was strong and that the tremor lasted for a few seconds.

“We were very scared, we were honestly rocked, things were falling off the shelves,” one reader told 24sata.

There have been no reports of any major damage, although the Split Emergency line has received a number of calls.

“We have been in contact with the authorities and there are no reports of any major damages or injuries. We know it was 5.1 magnitude with the epicentre between Livno and Sinj,” Split mayor Ivica Puljak told RTL earlier.