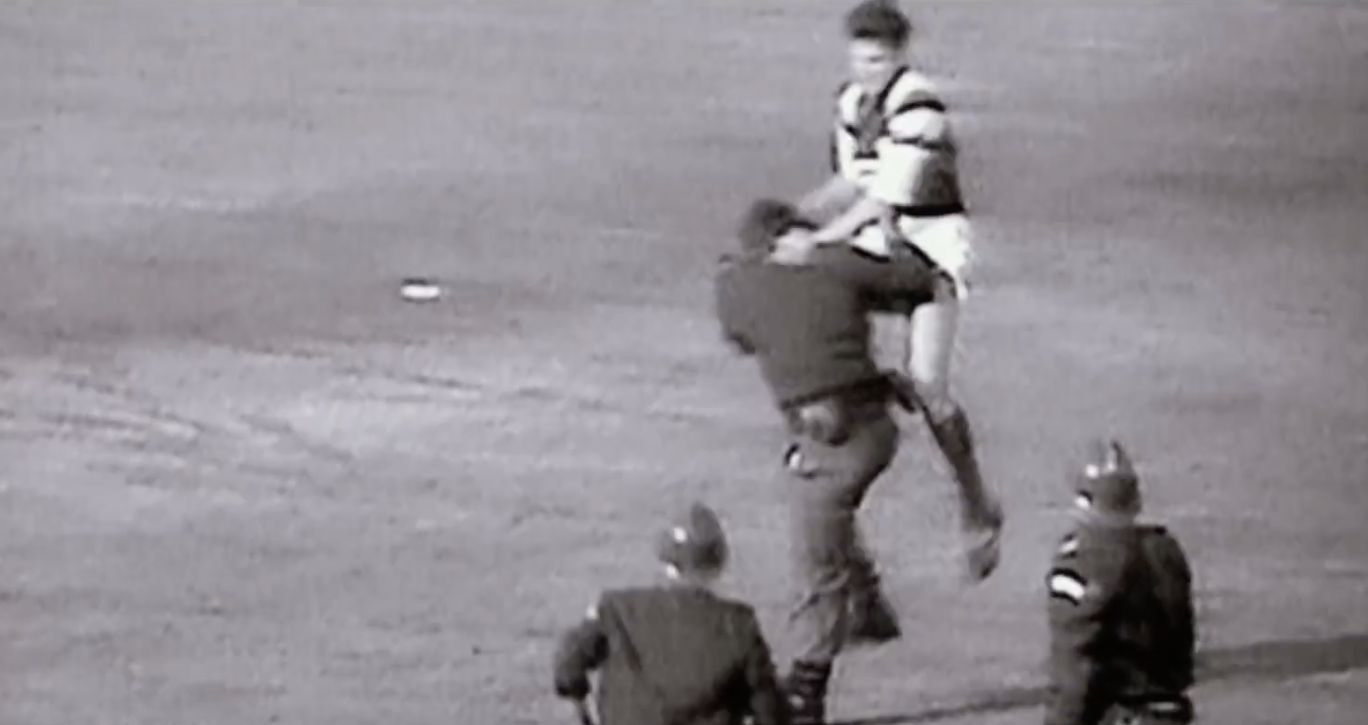 Zvonimir Boban kicks out at the police (Screenshot)

ZAGREB, 13 May 2019 – On Monday, 13 May 2019, Croatian football club Dinamo Zagreb marks 29 years since the most famous derby against rivals Red Star Belgrade which was never played.

That day will always be remembered for the riot which took place at Maksimir Stadium in Zagreb between the Bad Blue Boys, fans of Dinamo Zagreb, Red Star Belgrade fans Delije and the police.

To mark the anniversary, the club’s players and management will light candles for all the Dinamo fans who died in the Homeland War this afternoon.

The riot at the derby 29 years ago happened after Croatia’s first multi-party elections in almost 50 years in which the parties favouring Croatian independence had won the majority of votes.

The riot resulted in over 60 people wounded, including some stabbed, shot and poisoned by tear gas. The tension between the two teams was always high as they consistently placed at the top of the Yugoslav football league and often won the national championships.

In 1990, this took an even worse character due to rising ethnic tensions in Yugoslavia. The first multi-party elections were held in most of Yugoslavia and communism was ousted in favour of more national-oriented parties. The second round of voting in Croatia was held on May 6, when the Croatian Democratic Union (HDZ) won under Franjo Tuđman. Slovenia and Croatia, under new leadership, were the leading forces behind a drive to reorganise Yugoslavia into a confederation but were opposed by Serbia under Slobodan Milošević and the still powerful Communist system at state-level.

Amidst all the chaos, several Dinamo players still remained on the field, the Red Star players having already left for the locker rooms. Zvonimir Boban, the Dinamo captain and future Croatia captain, kicked police officer Refik Ahmetović who was attacking a Dinamo supporter.

The Bad Blue Boys soon came to Boban’s defence, acting as bodyguards. For this act alone, Boban was proclaimed a national hero of Croatia. He was suspended by the Yugoslav Football Association for six months and had criminal charges filed against him, although the officer he attacked (who turned out to be a Bosnian Muslim) publicly forgave him for his actions several years later.

“Here I was, a public face prepared to risk his life, career, and everything that fame could have brought, all because of one ideal, one cause; the Croatian cause,” said Boban.

Yesterday at Cibona in Zagreb a charity match between former legends of the club and the Croatian league was held also marking the anniversary. The match featured Boban, Igor Cvitanović, Dario Šimić, Goran Vlaović, Mario Stanić and other legends from the 90s.